Romantic compatibility is a deep question. It depends greatly on circumstance, timing, and guessing games about how committed the other person is. These things can be especially daunting to those with heightened sensitivities, known as empaths.

“Empath” is a word that can be thrown around and misused. Some believe empaths are a work of fiction with emotional abilities verging on the psychic.

This has even been the case in their representation throughout popular culture, such as NBC’s television show Hannibal. In the show, the protagonist is openly regarded as an empath and has almost paranormal abilities to recreate scenes he was not present for in his mind.

In fact, true empaths are those who feel emotions very intensely. And not only their own – they pick up on the feelings of those around them and experience them like they come from within.

As you could imagine, being affected constantly by your partner’s emotions can be extremely tiring. So, what kind of individual could fulfill an empath in a healthy way?

Well, there’s much to consider.

Who Qualifies as an Empath?

Empaths are people who unintentionally adapt to the emotions of people around them. They comprehend and feel the thought processes of those around them so deeply that they effectively become their own.

This ability exists on a spectrum. On the one end is firsthand emotional recognition – where the person embodies their own feelings. The other is categorized as extreme empathy for others that can even be felt physically.

This phenomenon can be described as either subconscious or psychic. It is an affectation that many might experience, but not know it has a name.

There are certain categories of other spiritual and psychic charts that can identify who may be more likely to be an empath. In astrology for example, Pisces signs are thought to be the most empathetic of the zodiac. They are last in the order and thus maintain aspects of every preceding sign. Within the Myers-Briggs personality test, it is thought that INFJ is the most empathetic variety.

Empathy is a concept generally accepted and touched upon in most psychological arts and sciences. But, it’s still abstract enough to be still debated and not completely common knowledge.

How Do Empaths Love? 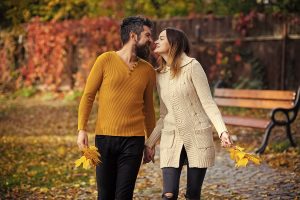 To put it simply: fiercely. As they are such strong facilitators of emotion, an empath in love is its own kind of passion.

Empaths are susceptible to falling in love easily. This is due to their effortless ability to relate to and understand others. When first meeting a person, they tend to pick up and focus on their good qualities.

However, it can occasionally make them solitary and introverted as a defense mechanism, hesitant to show and feel their own vulnerability.

But, of all the people an empath could fall for, what kind of person would be the best match? Who would be least likely to take advantage of their sensitive nature?

Who Should An Empath Fall In Love With?

People in for the Long Haul

Empaths do not emote lightly. Their giving nature opens them up being taken advantage of, which can be a serious problem. A betrayal of trust hits anyone hard – but when you feel so deeply, it can be severely wounding.

People who are sincerely looking for love, trust and compassion are the best bet for empaths. As empaths viscerally experience other people’s thoughts and feelings, they are perfectly capable of understanding and loving their partner for who they truly are. This is the perfect outcome for both partners.

If you treat an empath with the utmost love and respect, you will undoubtedly receive it back. Not only would empaths cherish those who appreciate their loving nature, but they would flourish in the knowledge that their commitment is matched.

Because empathy is strongly tied to instinct and feeling, empaths can have a hard time staying logical in romantic situations. They depend on their intuition the vast majority of the time, and while that has benefits, it is not a foolproof approach to life.

People who are more clinical and analytical would be a great match for empaths, as they try to see the world in a straightforward way. This could encourage empaths to put aside their feelings and see things for what they really are.

Many professionals who study relationships swear by the ‘opposites attract’ rule. That could certainly apply to empaths, who could alleviate some stress by learning to look at problems in black and white.

In love, we largely look to be understood. Luckily, empaths have an uncanny ability to do just that. Having similar outlooks and values within a couple is often a good sign for romantic compatibility – and two empaths will have much in common.

Dynamics between two empaths can be life-changing if there is clear communication and genuine affection for one another. However, it can become intense and somewhat of a roller coaster if emotional maturity is not prioritized.

A similar thing can be said for those who just super sensitive and generous. While not all sensitive people are empaths, they still have a strong sense of emotion in a similar way. Anyone with a sensitive disposition can feel hurt pretty easily.

While this match is dependent on the people involved and can go either way, it’s still one worth considering.

Falling in love and maintaining that passion is never an easy venture. And never is that truer than for empaths.

It is difficult for anyone to know whether the person they’re dating is ‘The One’ and whether the relationship will work out.

Empaths can be some of the most loving people because they have such a massive capacity for love. But, the best way to make it work is to be with someone who is very aware and considerate of the other’s feelings.

At the end of the day, empaths love to love. It is simply a matter of finding a healthy, fulfilling, requited love.