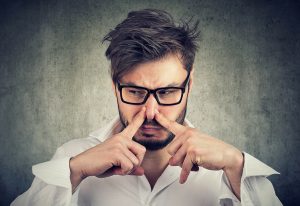 Have you ever come across what seemed to be phantom scents and wondered what was causing them? If so, you might have clairscent abilities (also known as clairalience)– meaning that you are able to detect aromas as they filter in from the spirit world.

These might serve as signs from the deceased, but in some cases, they might have more sinister origins. So, if you do have clairscent abilities, it’s wise to be aware of what this means and how it can affect you.

What Does It Mean to Have Clairscent Abilities?

Clairscent is also known as clairalience, clairosmesis, clairolfaction, and clairessence. This skill means that you have “clear smelling” without using your nose. It might seem strange, but the energies and vibrations that your brain thinks are smells are actually fragrances or odors that originate outside of your physical surroundings.

Have you ever thought about a person, time, or a place and then perceived scents that you associate with it? This might be cigarettes, food, perfume, or anything else. Maybe when you think of your grandma, you can smell baking cookies! That is the power of clairalience, and your memories can be realized through frequencies and vibrations of your psychic sense of smell that you associate with that place, event, or person.

How Does It Work?

There are several different ways that this psychic ability can work, depending on the setting you are in. They can be triggered by memories, divination, contact with the spirit world, and more. What they have in common is the way you will experience these aromas associated with it.

In essence, clairalience is a psychic power that utilizes scent as the medium through which a message is relayed. Clear smelling is often accompanied by clairgustance, which refers to the ability of clear taste. Unlike physical senses, your psychic senses will operate using a spiritual vibration. The aromas will be brought forth straight from otherworldly realms, memories, visions, and spirits. The entire Universe and everything in it resonates using energy frequencies, and your sense of smell is no exception.

Depending on your situation, paranormal smells can range from a comforting scene, like the smell of baking cookies wafting from your grandmother’s kitchen, to the fear and anxiety associated with the smell of a hideous odor, like sulfur. The latter can occur if you are in the company of an evil ghost or demonic spirit.

If you use your imagination creatively, you can evoke your clairscent abilities by imagining aromas that are related to the creations you come up with. You will also be affected to scents that warn you of danger, or through practicing divination and ritual magic, in which you seek to discover things from the past, present, or future. In this scenario, scents can be used to trigger your innate psychic powers.

If you are going into a dangerous situation, you can protect yourself by meditating on the smell of something that represents protection to you, or something well-known. It might be frankincense, sandalwood, or myrrh.

This is especially important if you often find yourself ghost-hunting. This will ensure that you won’t have any attachments or bring the negative entities or energies back with you. If you detect something nasty, you might be in the presence of a dark spirit, so make sure to note these experiences for future reference. This will help you to identify what you are perceiving!

You can prepare a small test for yourself to help you learn what reactions you have to certain smells. This will require using your physical sense of smell in the beginning, so note your responses to each odor. You might respond differently than others, but it’s your reaction that matters.

You might have physical reactions to specific scents while using clairscent skills, and as a result, your intuition will hone itself to help you ascertain what is happening or who is trying to contact you, according to the aroma you are detecting.

As you explore your abilities further, make sure to record and catalog things as you learn them, so you can refer to them later and learn from your past experiences!

To help you prepare yourself for some of the things you might experience when exploring your clairscent abilities, here are some scents that you might learn to identify as you go along: